Yesterday a friend  looked at me, and said “…you know what I hate that people do on Facebook?”

Clearly a question for the ages.

For those of you who don’t know a life without Facebook/Twitter/Tumblr/etc, social media is as natural as breathing. Its been my experience that for a certain age group, its impossible to imagine not sharing every waking moment of your day with countless strangers.

These people are usually #TeamFollowBack. I’m not talking to you kids. Go have a juicebox or something. Grown folks are talking.

For the rest of us, social media was something to adjust to. I’m [redacted] years old, so I have fond tween memories of the days when we paid for internet by the minute, could go make grilled cheese sandwich in the time it took for your dial-up to connect, and eagerly responded to every A/S/L check (of you don’t know what A/S/L means…WHO TOLD YOU TO GET OFF YOUR COT! ITS NAP TIME!). Yes we had chat rooms and forums but it was all about your kewl screen name, not so much about you. It seemed like in the dark ages, anonymity was key. You didn’t WANT the kid in Chem to know your AOL screen name. WHAT IF HE MADE FUN OF YOU OMG!!!!!

Today? Not so much.

Back to my friend. Her issue with Facebook revolved around one family member posting a vague status about the health of a distant family member (who happens to have the same name as several close family members. No, she is not related to George Foreman) which then set off a firestorm of confusion and worry through her family until everyone got their facts straight. All because some dude was, for lack of a better term, attention-whoring.

Attention-whoring is an epidemic in social media. You all have that “friend” who posts status updates like “Oh god. What should I do?”, *vague emo/passive aggressive quote/song lyric that you’re probably taking out of context*, or my personal favorite, the 😦 Everyone who does this KNOWS that the people closest til them will wonder whats wrong and ask. The attention-whore will let dozens of replies to this vague cry for attention pile up before saying “omg lol you guys! I just forgot to pick up eggs/heard that song on the radio/am an asshole!”

Of course, equally annoying are people who complain about social media. I’ve seen plenty of articles bitching about what people put on their social media accounts and the frequency with which they do so. Despite what I wrote above, I rarely join in on that kind of thing. Frankly, when I go to Facebook I WANT to see pictures of my friend’s squishy adorable babies/dogs. This weekend a close buddy posted multiple pictures of her husband attempting to paint a nursery for the daughter they have on the way. Another friend posted about her students being accepted into a awesome travel program. Someone else posted pictures of the dinner he cooked for his wife. These things are slices of the lives of people I choose to interact with. They make me happy. Luckily, my friends don’t post status updates like “Just woke up”. Much like what I say when people complain about what shows up on their friend feed on Twitter…you followed them, so its as much a reflection on you , as it is on them.

There is a recent phenomena on Facebook that I cannot abide.  Maybe this has always been going on, but due to changes in Facebook’s sharing policies, we are all seeing way too much about what our friends DO on Facebook. And this leads to, like people on Twitter who campaign for re-tweets, people caring way too much about how many people “Like” a photo. One of my co-workers “liked” a photo of a partial birth abortion as part of some pro-life message. Never mind that partial birth abortions aren’t even legal in this country. Never mind that the captions on the photo erroneously described the procedure as if that was how ALL abortions are formed. My point is? WHY DO I HAVE TO LOOK AT A PICTURE OF THAT!? I’M JUST AMUSING MYSELF DURING MY LUNCH BREAK!!!!!!!!!!!!!!!

But fine. If you have personal convictions, you should feel free to express them. Bygones. 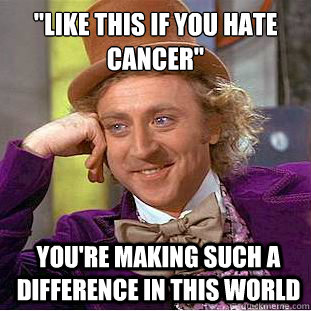 Did I miss a meeting? Was there a poll? Did the guy in accounting say “you know what? Cancer gave me a ride home after the Christmas party and she’s not bad. She’s just misunderstood”. IS THERE ANYONE ON EARTH WHO IS OK WITH CANCER!? At least on Twitter and Tumblr people have the decency to lie and say they will donate money based on re-blogs/re-tweets. On Facebook its just…disasturbating. And instead of caring about your cause of the moment, I’m just annoyed and all:

The simple fact is this: there is no right or wrong way to do social media (i mean…horse e_books exists. Not that anyone can tell me WHY they follow it). So if someone hates your Facebook/Twitter/Tumblr…well actually they probably just hate you. So you should de-friend/unfollow them immediately. And then post a vague status update that totally doesn’t explain why.

Now, if you excuse me, I have to go tweet. I didn’t get to over 45,000 tweets by slacking off. CONSTANT VIGILANCE