So. The thing about me is: I LOVE KOREAN FOOD. Oh, let me count the ways.

I definitely didn’t grow up eating Korean food. Until a few short years ago I was completely unfamiliar with it. For about two years I lived a stone’s throw from one of the more well-known Korean BBQ restaurants in this fair city. Its a huge restaurant with a TINY parking lot. Whenever we drove past it, my mom would remark “that place must be owned by the mob or something. Look at all those cars”. In general I am mistrustful of restaurants with blacked out windows so I accepted my mother’s clear wisdom on the matter.

Years later I had occasion to dine in that particular BBQ joint and…it didn’t make a big impression. I remember being amazed by the dozens of banchan (side dishes) but otherwise…meh. Unlike most things food related, I wasn’t overly interested in investigating Korean cuisine. Plus…I smelled like smoke.

Oh, how times have changed. Now that I live in what is commonly known as Chicago’s “Korea Town” (less and less so by the day) I have dived mouth first into Korean cuisine. I eat it all. And more importantly, I cook it all. And of course, I have favorites.

I have always wanted to make my own kimchi. But I’ve been afraid as I currently live in a relatively small apartment and…kimchi can smell pretty rank. Whenever I make the mistake of not closing up a jar of store-bought cabbage kimchi (usually because I’m in a rush to shove my dinner in my face) within ten minutes or so my entire apartment smells like the stuff. I love kimchi but I don’t want my entire life to smell like it.

But this weekend I decided to throw caution to the wind and make my own radish kimchi, my personal favorite kind. With a trusty recipe from Maangchi as my guide, I dived in. 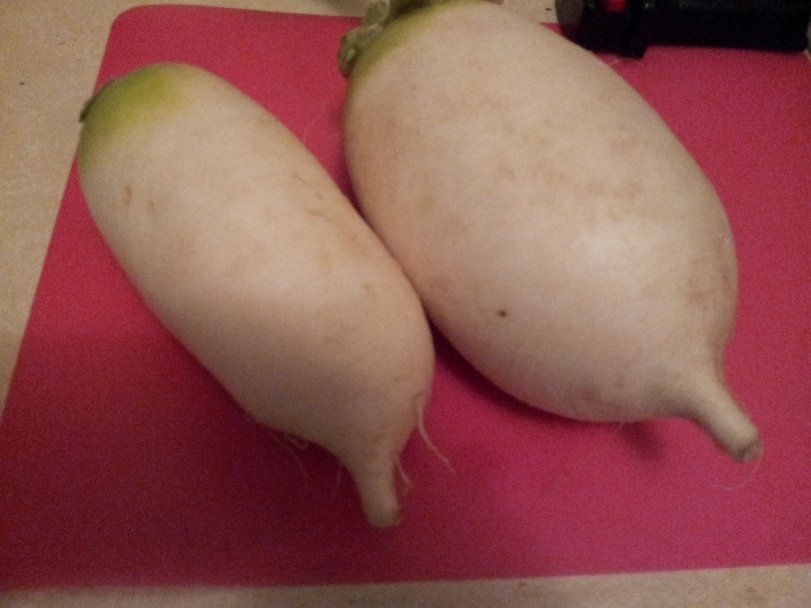 I had to hip check four Korean grandmothers for these things. Then I got stabbed in my kneecaps.

As it turns out, making kimchi? Totally kinda fun and easy. All I had to do was peel and cube the radish, then let it hang out in a mixture of salt and sugar for about 30 minutes. 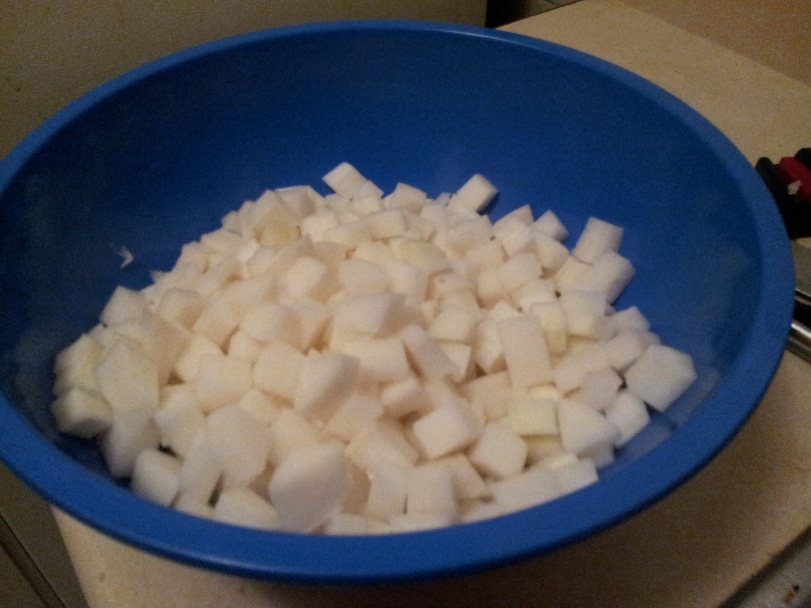 The salt/sugar combo draws out some of the moisture and then you end up with…IDK radish juice that you drain off and add back in later.

There seems to be some dissent among people who care about such things about whether you should rinse your radish at this point. It never occurred to me but…well. We’ll see. I am worried about it being aggressively salty. *sigh*

Moving on, now is time to add in the remainder of your ingredients: fish sauce (I HATE fish sauce, but it is infinitely useful), minced garlic, ginger, the radish juice, chopped green onions, and a rather healthy amount of red pepper flakes. Mix it all together with you hands and VOILA! 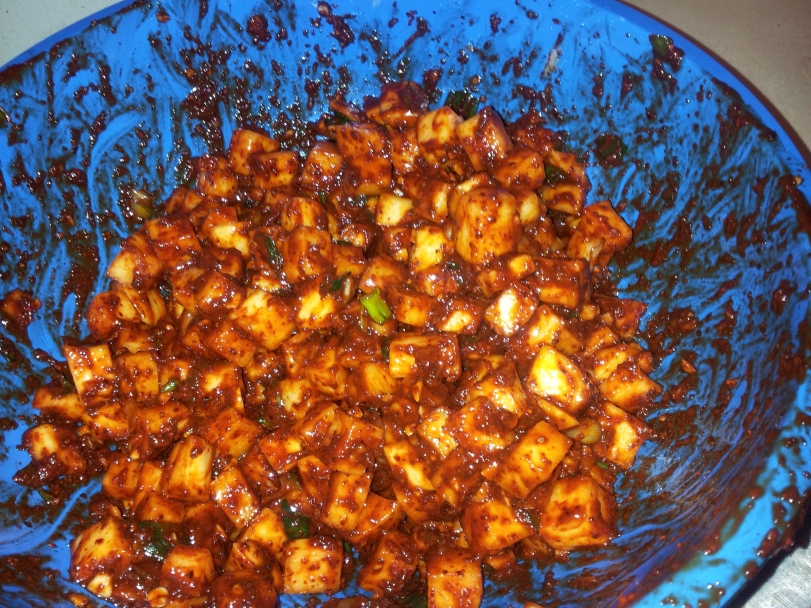 You CAN haz kimchi

I would have to say that my favorite part of the process was playing around in the mixture and making sure that everything got coated evenly. Because I’m mentally five and like, miss playing with playdough or something. Whatevs.

Because I’m smart, I tend to keep good quality jars that other things came in to re use. Luckily this means that I had heavy 5 glass jars of varying sizes just waiting to house my kimchi. 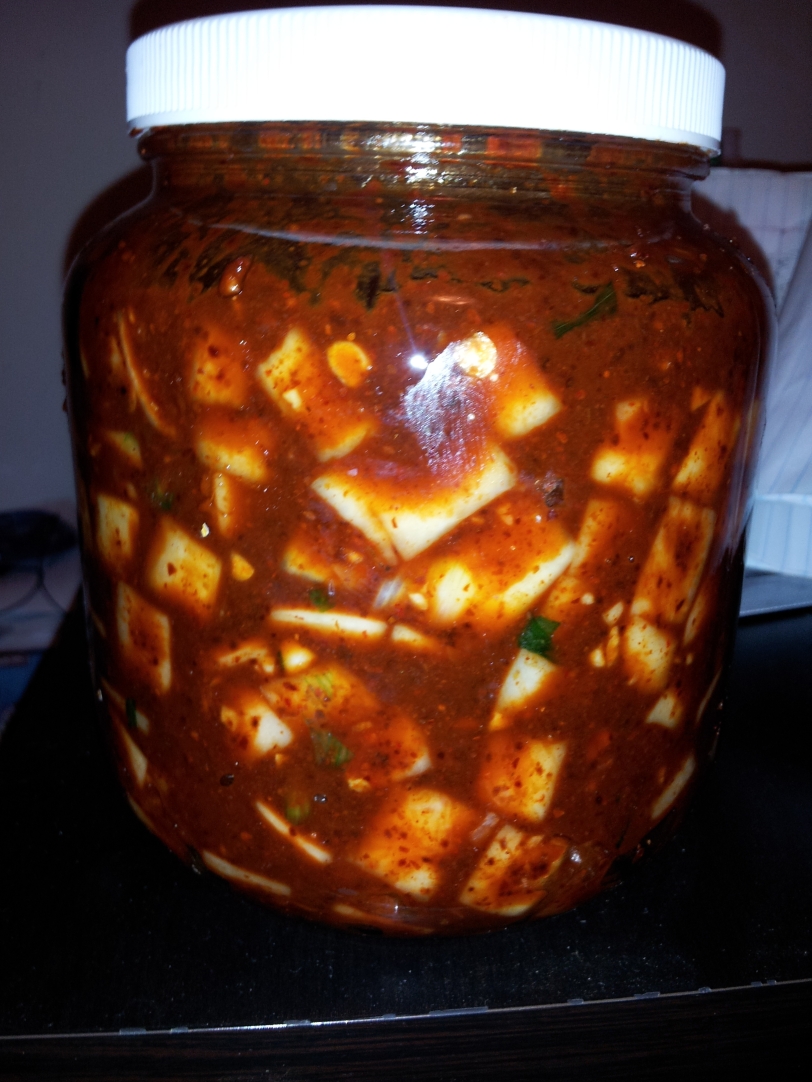 This jar previously held cabbage kimchi that I bought at H-Mart. INCEPTION

According to the recipe, you can eat it right away or let it chillax and ferment for a few days. Since I tend to prefer my kimchi to swing more on the sour side, I’ve let it sit out on my dining room table since Saturday afternoon.I very much look forward to tasting it tonight…or maybe tomorrow. I’m not really decided on just how long I want to wait. It was VERY hard not to crack into it last night to go with my Super Bowl dinner of short ribs. 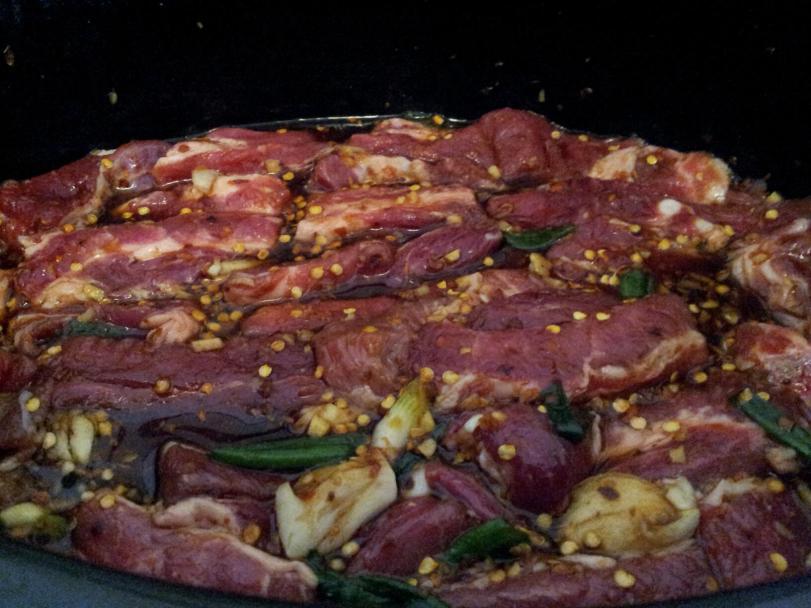